We participated in the 7th Kogin Festival! 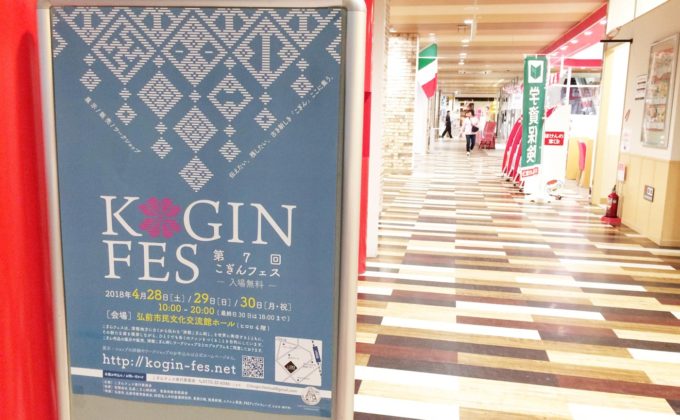 In Hirosaki City, Aomori Prefecture, the birthplace of ‘Kogin-zashi,’ a big event “Kogin Festival” is held every spring. This is an unprecedented event where artists can exhibit and sell their works and see various Kogin-zashi.
We participated in this event for the first time in 2018. I am going to report how the last event went.

Kogin Fes started in 2010 with the hope that as many people as possible would know the charm of “Tsugaru Kogin-zashi.” You can get acquainted with the past, present and future of Kogin through various contents such as exhibitions, merchandise sales and workshops.
This is the 7th time, and the cherry blossom festival, which celebrated its 100th anniversary, was attended by 2,700 visitors in three days and it was the largest crowd ever.
The featured project is a joint exhibition of the three largest Japanese traditional embroidery, “Tsugaru Kogin-zashi,” “Nanbu hishi-zashi” and “Shonai-sashiko.” It is said that such an exhibition where you can see the works of the three Japanese traditional embroidery at once is rare in Japan. “Kogin-zashi” is an embroidery technique introduced to the Tsugaru region of Aomori Prefecture. In the old days, this name was given because work clothes was called “Kogin.” Exhibitions are lined up with indigo-dyed linen and white cotton thread, which can be called that they are the origin of “Kogin-zashi.”  The combination of patterns and fineness has a beauty that will not fade even today. Nanbu Hishi-zashi is an embroidery developed mainly in Hachinohe City, Aomori Prefecture. Unlike Kogin-zashi, it is characterized by a widely rhombus patterns composed of even counts. Born to reinforce the work clothes of farmers working in the severe cold weather in Tohoku and protect themselves from the cold weather. Various patterns are decorated with people’s wishes such as good harvest and prosperous business.
This year, Kogin-zashi was incorporated into sports teams and branded goods related to Aomori. This is a new uniform for the Hirosaki City soccer team “Blancdieu Hirosaki FC.” The Kogin-zashi pattern is inspired by the spring energy of Tsugaru, which shows excitement as the snow melts in spring. The shoes of “U by GAKU,” a collaboration between the global soccer brand “umbro” and Gaku Shibasaki who plays in the Spanish football league. Because he was born in Noheji, Aomori Prefecture, a collection with the motif of Kogin-zashi was born.
20 groups of artists from inside and outside the Aomori Prefecture gathered at the venue. We are introducing unique artists from traditional designs to original designs. Mr. Tanaka has been working on Kogin-zashi for 45 years. A beautiful combination of indigo and white is used to create beautiful tapestry. At the event, along with a masterpiece tapestry, works collaborated with Kumiki crafts are also on display. It’s a beauty that you can admire automatically. Tanaka’s production scenery is also introduced in detail in the “Sora-tobu Kogin No.2” magazine that was recently released. PetitKOGIN’s finely Kogin-zashi is with vivid and fun color matching while protecting the traditional pattern. Multicolored Kokeshi dolls with Kogin-zashi are very cute. Many workshops are held around Aomori city. “Staba de Kogin” (means Kogin-zashi in Starbucks) is a collection of Kogin-zashi held once a month at Starbucks in Hirosaki City. It is for bringing each work in production and coming to relax and raising information on the area. It is a wonderful activity that creates a gentle connection through Kogin-zashi. It is arranged in a cute and easy-to-use fashion pattern that can be incorporated into modern life. Materials such as yarn and cloth are used that are particular to Hirosaki and Tohoku region. Kogin-zashi accessory tama is mainly active in Tohoku region craft events. The whistle bag tailored with Kogin-zashi is hard to find anywhere else. “North constellation” is usually active mainly in Chiba, but he was from Goshogawara City in Aomori and was exhibited together with “Modoco,” his seniors in school days and Kogin-zashi artist. We also bought one.
“Sashibou” is very popular for the delicate Kogin-zashi in linen. By making a 1.9 cm square QR code with Kogin-zashi, it attracted attention and was featured on TV. At the booth, there is a Kogin-zashi ”gacha gacha” machine that a small walnut button with Hirosaki’s apple pattern comes out. The accessories that have a cute pastel color with Kogin-zashi are casually shining and feminine. She started Kogin-zashi because her grandmother had a culture of Kogin-zashi from generation to generation. Mitsu-mame is a three-piece Kogin-zashi unit of mother, aunt, and daughter. Gentle color combinations are cute, and there is everything you want to use from old-fashioned patterns to original pattern goods. The business card case Kogin-zashi with thread dyed in grapes is also nicely colored. Fragrance is made with herbs grown in the garden at home, and original Kogin-zashi and fragrant accessories are produced. The potpourri sachet with Kogin-zashi is a soft natural scent. There is a cat brooch with a motif of her five cats. Kogin * bear style is popular for teddy bears that are casually filled with Kogin-zashi. Each teddy bear is designed with a combination of colors and patterns that match the theme. This bag has plenty of capacity and a solid sense of security. The handle is made with Akebia’s vine crafts, a Tsugaru traditional craft. Every time you use it, you can get used to it and enjoy the color change. In commemoration of the 100th anniversary of the Hirosaki Kanoukai (Hirosaki Cherry Blossom Festival), there were lined pieces of Kogin-zashi using cherry and apple dyed threads. We also handle Hishi-zashi works. Since she lives in Misawa City, Aomori Prefecture, she would like to focus on the southern tradition of local Nanbu hishi-zashi. As a Orihime in Showa Village, where the tradition of Karamushi weaving remains, Ms. Yamauchi has Kogin-zashi into the fabric that she has worked on from the cultivation of Karamushi to hand weaving. The natural texture of plant dyeing creates a wonderful shade. when you touch it, it feels refreshing and it is perfect for the coming summer season. Ms. Yamauchi’s activities are also introduced in the special feature of Sora-tobu Kogin No.2. “Sora-tobu Kogin” is a reading material packed with the charms of Kogin-zashi. The second issue that has just been published will also appear at Kogin Festival. This is the second issue that focuses on making cloth to Kogin-zashi. After this special feature issue, the insects before the fabric is displayed. This is a valuable document that clearly shows the differences in texture and color between the past and the present. Miasa is active in Hirosaki. There are many popular amulet pouch in the workshop. It is an auspicious design that combines double-strings with congratulatory patterns such as turtle shells, gourds, and abacus. they are perfect for fortune and amulet cases and gifts. SWALLOWTAIL meets KOGIN is best known for the Union Jack. The rock world is expressed with Kogin-zashi. Because she loved UK rock, she came up with an idea like this. Items that are easy to incorporate into everyday fashion, such as accessories and bags, are lined up from the desire to enjoy daily use of Kogin-zashi. I was surprised to hear that many of these works were produced by one person! The popular purse is a combination of Kogin-zashi and textiles that is stylish and exquisite.

Harcogui’s accessories have nice calm colors. they are perfect for the yukata (informal summer kimono) of the coming season. Her display is also a Japanese taste that complements the world of her work. Ms. Sato is teaching Shonai-Sashiko and opening the “Shonai-sashiko Store” with a line of restaurants at the top of Mt. Haguro in Tsuruoka City, Yamagata Prefecture. There are many kinds of fine and elegant Sashiko that can be purchased at Haguroyama shops. The Nanbu Hishi-zashi Liaison Association was established in March of this year to send more information on Nanbu Hishi-zashi. Along with the exhibition of the three major Sashiko, the sales booth will be lined with daily use accessories such as tablecloths, business card cases and bags. It is a combination of classic patterns, but delicate and elegant patterns are all designs that you want to use in your life. It was crowded with many customers from inside and outside the prefecture.
There are people who inherit tradition, people who adopt new colors and patterns, people who are particular about making materials … The attitude that each person has the own style and was created with a strong feeling that “I want to do this” was very impressive. Each style is different, but everyone has the same desire to connect Japanese traditional embroidery cultures such as “Kogin-zashi,” “Nanbu Hishi-zashi” and “Shonai-sashiko” to the next generation. It was Kogin Festival where I was able to meet the quiet enthusiasm of the people who supported the Japanese traditional embroidery culture.
Kogin Fes will be held in May 2020. I’m looking forward to seeing the excitement. 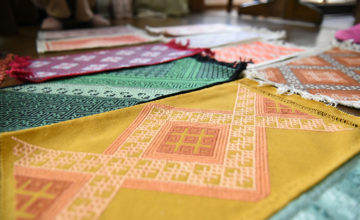