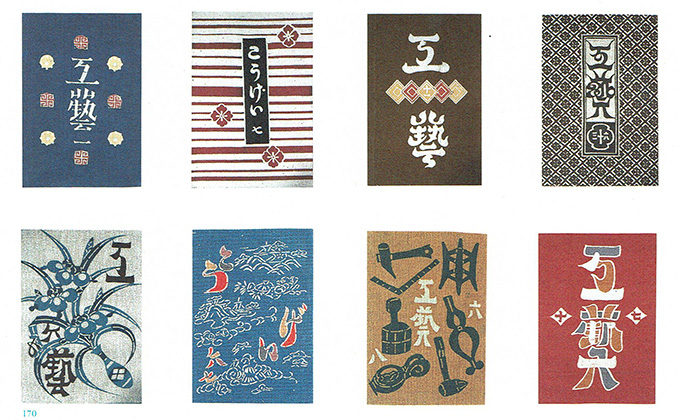 Koginzashi was popular from the Edo era to the beginning of the Meiji era. However, it abruptly declined after the first railway opened in Aomori prefecture. Apparently, it was rare to see Kogin embroiderers at the end of the Meiji era. That said, Koginzashi became widely known all over Japan after it was introduced in the magazine, “Kougei” No.14 published in February 1932.

“Kougei” was launched in January 1931 as an institutional magazine of the Mingei movement. However, it was forcefully discontinued during the war. The magazine was published up to the final volume of No.120 issued in January 1951, which were all edited by Muneyoshi Yanagi. With his philosophy, “ magazine is a part of the craft,” every print was designed elegantly.

The magazine, “Tsugaru kogin” issued by NHK Press in 1974, inserted the outlines of Yanagi’s articles presenting Kogin in the “Kougei” No.14. In which, Naomichi Yokoshima, an author and editor of “ Tsugaru kogin,” mentioned that Yanagi’s every words is well deserved to be published. Doubtlessly, his writing is fully detailed as if he had experienced it, which surely enables people to imagine Kogin’s heyday, the beauty and superbness. With his works, I was able to recognize the greatness of local women who accomplished Kogin. Particularly, they were less educated so much so that they could not write any Japanese alphabet, so that they had to learn it throughout decades of experience relying on oral instructions. On the contrary, nowadays, we can easily design and make Kogin with a computer.

We will introduce the Yanagi’s articles blessed with his love of Koginzashi, which were inserted in “ Tsugaru kogin” (NHK press, 1974) as an archive.

（１）Winter brings a raging snow storm to Tsugaru. Mountains, trees, houses and people are powerless. It is impossible to fight against it. When the snow is coming, outdoor life is over. It’s daunting. A strong wind makes it worse, making people feel colder and more painful. Snow piles up heavily. At the end of October, the sky is gloomy. Autumn went by quickly, followed by murky winter. Night is harsh and long. We need to wait until April in spring to see a clear sky. During a half of the year, we are forced to become snowed in due to the relentless fall. I’ d rather say, our lives are buried by the weather. How can we survive for such a long time? Naturally, outdoor works are replaced by indoor tasks. Under the dim light of snow or votive lights, we begin various handiworks to kill the time. That is, it sucks up the time. Unless the time is consumed, winter becomes a curse. But we have things to do. After starting the handiwork, a clock stops ticking. “Kogin” is one of products of snow country. It is the product created by an abundance of time and absorbers. Busy countries cannot be a hometown of “ Kogin.” I am not sure about the reason, but it seems that snow and handicraft deeply go hand in hand.

（２) Such a thing will never be created, never ever. It will never happen anywhere else, other than Tsugaru. The Nature, history and humanity that it has are on its own. Also, the flow of time is different between past and present. This coincidental connection invented the product called “ Kogin.” “ Kogin” has no fate to be born in any other country. It is a unique example of regional handicraft in Japan.

The tradition was already extinct. Once it passed away, it has little hope to come back. Because its particular fate created the handicraft. Today, Japan still exits. Snow still falls. However, modern women are not in the same circumstance. No wonder that they don’t make “ Kogin” as many as before. “ Kogin” is a passing tradition. It survives only in living memory. That said, its beauty will never die, which is the uniqueness of “ Kogin. ”

（３）Ugly “ Kogin” never exists, even a single of cloth. You never find it. However, the quality varies. Some patterns are better than others, but there are no substandard products. Why does ugly “ Kogin” not exist? It has no secret behind the door. “ Kogin” will answer the question: “ It is made by abiding by the law”, which is the clearest answer than any other explanation.

The grid is the life of every Kogin. A Kogin embroiderer is obedient to the texture of a fabric. If it goes wrong, “ Kogin,” is not produced, and it turns to ordinary embroidery. The grid is made by the law. Whenever you abide by the law, you can make Kogin. It is numeric order. A disorder makes a pattern disorganized. Following the number, the pattern is created as it should be. Skillful or clumsy is not a matter. If you follow the right number, the beauty is accomplished. The number is a mother of a pattern. As long as you follow the rule, the pattern is in safe. “ Kogin” is not in danger. Whoever the Kogin embroiderer is, every “Kogin” is made beautifully. Because they follow the way they should step. Their power does not make it. Their obedience to the number conjures up a wonder.

Modern people are selfishly busy and appreciate their freedom, which does not force them to make “ Kogin.” Most of the ugliness is connected with the time off of the law. Number is united with beauty.

（４）Probably, they felt the sadness of their fate while being snowed in. However, “ Kogin” is not a cause of the curse. It brings them a chance to make them happy. If it is a curse, it will never survive. A woman who mastered Koginzashi is acknowledged in her superiority. I can see a pride as a daughter or a wife. That is why they compete each other to create the best “Kogin” with their greatest efforts. Otherwise, such a demanding task does not exist as Kogin reflects women’s integrity. Women forget their boredom by engaging in the boring handiwork. Women were fond of making it. Maybe, a woman who did not love Koginzashi might not have been loved by a man and others. “ Kogin” reflects whether daughters were well brought-up or not. Mothers teach it to small daughters.

A pattern of “ Kogin” must have been discussed frequently. Each pattern was named after regions. Women’s expertise were tested, such as how to combine patterns or how many combinations they know, which eventually contributed to various patterns’ creation.

Women and men in Kogin clothing headed to lively streets. On special occasions, such as celebrations and festivals, a village was woven with “Kogin”.

（５）Why was this embroidery developed at the corner of a northern country? Where did it come from? According to old books, a navy hemp cloth was used for the native’s clothing in the Ohu region. If so, Sashiko might have begun with a mending task for a frayed spot.

With old white hemp threads, they put stitches in one by one to close a whole. It looks like sporadic mending, but it is a pattern as Kogin should be. When the painful edge is cured, it becomes a style. If you stitch hemp cloth in the first place, it will be durable. For making Koign, just putting stitches in a texture of the fabric, so that you can effortlessly create a fine pattern. It takes a lot, but it is a good work for a long winter. After completed, everybody says that your work is beautiful. Like this, during a long period, one person to two, two to three, and finally many people became involved in Kogin, which made the work exciting. When cotton was newly introduced to the locals, imagine how happy they were. Cotton threads warm up even cold hemps. At last, women got their steady work, which had gradually heightened their pride. Eventually, “ Kogin” had become recognized as the beauty of handiwork rooted a bare necessity. This is what the history of “ Kogin” is all about.

However, the women are respectably obedient. They never change the techniques without any reason. Even if it takes lots of time, they put stitches one by one in a texture of a fabric. They are devout to the tradition. Hence, there is no chance that they are disrupted. The beauty began from a bare necessity, and was ingrained in the law. “ Kogin” is sound. As long as the beauty is sound, it is an authentic craft in technical arts.

（６）The unsung women in Tsugaru! You passed down such a brilliant art to us. Hemp and cotton were used for the local people who were banned from adopting silk. Midst the prohibition, you created the magnificent embroidery. How should I call your circumstance, you were unhappy but happy or you were happy but unhappy? The women transformed an ordinary thing to the beautiful along with their lives. This should be the right path to be a craft art. We are fascinated by the loveliness. We have learned many things from them.

You may not know, but it is the most unique embroidery in Japan. I appreciate my fate, which brought me to encounter such an art, though my home country is far away. Most of the creators have already passed away. As they were from a poor family in a remote district, probably, without their own graves, they are sleeping under snow. Even when spring comes, the visitors who bring flowers will gradually die out. On behalf of them, I would like to dedicate this article. I wish it would become a part of “ Kogin”. Let me commemorate “Kogin” for goods. People who commemorate Kogin from the bottom of heart must be increasing, and even after. “ Kogin” is the “Kogin” who never die.